On February 26th, 1953 the Most Reverend Martin D. McNamara, the first Bishop of the Joliet Diocese, authorized Father John Savukynas, MIC, to locate property in Oswego for a Catholic Church. Father John was pastor of Saint Mary Church in Plano. The new church would be called Saint William, Mission of Saint Mary. The Diocese purchased four lots on Washington Street and construction of the church began. Archbishop William D. O’Brien, Director of the Extension Society, had received a $30,000 donation for a new church provided it was named Saint Anne. The donor had great devotion to Saint Anne, hence, Saint William gave way to Saint Anne. The congregation of 30 families met in the community room at the Oswego High School, which is now known as Traughber Junior High School. On Christmas Eve 1953, Mass was offered for the first time in the new mission church, The steady growth in the area led to the purchase of eight more acres behind the church as the possible site for a new and larger building. This transpired on March 20, 1957, As the growth continued, a neighboring house was purchased as a rectory.

On May 17, 1963, Saint Anne was declared an independent parish and Father Clifford Brier took up residence as the Founding Pastor. Father Brier was the only diocesan priest in Kendall County at the time. With a membership of 310 families, the Verona Fathers of Yorkville assisted Father Brier. Four Masses were held each Sunday morning. Eventually, the $30,000 donation was paid back to the Extension Society so they could keep on with their mission work. As families kept moving in and subdivisions kept being established, it became apparent that a larger church was desperately needed. In 1965, one of the parishioners, Mr. William F. Neil, drew up plans for a new building. Originally, a round church was designed to be built on the additional eight acres behind the small church. In the meantime, on May 23, 1966, the Most Reverend Martin D. McNamara died and the plans for the building project were put on hold.

When the time came to activate the plans, William C. Monier, developer of a new subdivision called “Windcrest”, offered a parcel of almost six acres for a new church. Since this location proved to be the center of the populated area, the offer was accepted and three additional acres were purchased on June 10, 1968. Mr. Neil designed a larger church seating 750, and ground was broken on Saint Anne feast day, July 26, 1968. At that time, the parish had a total of 500 families for a membership of 1,883. The first Mass was celebrated in the new church on October 17, 1969. Saint Anne Church was dedicated by the Most Reverend Romeo Blanchette, the second Bishop of Joliet, on May 24, 1970. By 1971, over 600 children attended religion classes, 161 were confirmed and 65 received their First Communion in the new church. 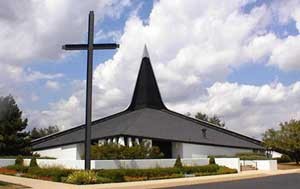 Chicago newspapers were quick to feature that “new church in Oswego” as an architectural treasure. They called it a real “traffic stopper”. “You cannot ignore the tilted steeple which rises into the country sky. The gradually rising ceiling reminds one of the vault of heaven arching over everything.” The church that has no windows was built in modern architectural style to depict Faith in Motion. The exterior, with its sloping roof, looks different from all angles. It was built at the cost of $300,000. In addition to the sanctuary, the building contained sacristies, a preparation room for brides, a crying room and four confessionals. It was carpeted with 1,200 square yards of carpeting.

Father Brier became a “commuter”, traveling from Washington Street to Windcrest every day for five years. It was the hope of parishioners to eventually build other buildings on the nine-acre plot.

In the fall of 1973, all 24 rooms of the Boulder Hill School were being rented for Religious Education classes on Saturday mornings. There were two shifts. The religion classes included the children in grade Kindergarten through 8.

In November of 1973, construction was started on a new Parish Center next to the Church. Besides offices and a large meeting room the Center included living quarters for two priests and a housekeeper. “We are constructing for the future,” explained Father Brier. Mr. William Neil also designed this. About 100 families moved into the parish during the summer of 1973 and Saint Anne passed the 750 family mark. Completion of the $80,000 building was expected by April 1, 1974. Father Brier announced that no campaign for funds for the building would be held.

Saint Anne enjoyed a most satisfying relationship, ecumenically, with the other churches in the area. It joined the Oswego Council of Churches and was often the scene of united services.

In December of 1974, Father James Brummel was assigned as associate pastor, assisting Father Brier with the membership of 1,200 families. As of February 1976, Saint Anne Hall (the old church) was renamed Brier Hall by members of the Men’s Club and the Council of Catholic Women. The new name was chosen in appreciation of the many years of service and devotion Father Brier had given to his parish during its growing period. The hall was the focal point of all large parish functions and was used by many community organizations on a rental basis.

Due to poor health, Father Brummel left Saint Anne in November of 1975, and it wasn’t until March of 1976 that Father Gerald Tivy became an associate pastor of Saint Anne. Father Tivy served Saint Anne until June of 1978. Father Ronald Hart joined Saint Anne as associate pastor in June, 1978 and served until March, 1979. In April of 1980, Father Leonard Guz became associate pastor. In October 1982, Father Brier retired and Father Joseph Voss was appointed pastor on November 10, 1982 and served until June of 1983. On August 8th, Father Anthony Taschetta was appointed pastor of Saint Anne and was installed by Bishop Daniel Ryan on Saturday, August 20, 1983. The parish had grown to 1,400 families by that time. Reverend Mr. David Brockman became the first permanent deacon of Saint Anne in September of 1984. Father Guz left Saint Anne and was replaced by Father Michael Collins, who served until 1986.

A momentous occasion was the installation of a new pipe organ built by Mr. Martin Ott of Saint Louis. It was dedicated on November I 3, 1986. Dr. Marie Kremer of Saint Louis gave an organ recital on Sunday, November 16th, which was enjoyed by many. Since then, several concerts have been presented. 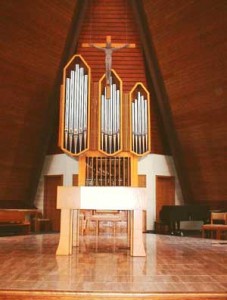 Father Robert Coleman was ordained on June 6, 1987, and his first assignment was as associate pastor of Saint Anne. At that time, plans were in progress for a new parish center. Father Bob was made building coordinator and everything was completed in good order. When finished the Joachim Center (named after the husband of St. Anne) housed the church offices, a beautiful chapel, a fellowship room, two libraries, the nursery, a teen center, ten class/meeting rooms, the large center hall which can be divided into four rooms, a kitchen and storage rooms. There was no capital fund drive. The tithing program generated all of the money for the building, furnishings and landscaping. The groundbreaking ceremony for the Joachim Center took place on April 9, 1988. Bishop Roger L. Kaffer dedicated the building on March 12, 1989.

In the Spring of 1994, we moved our center of worship to the big hall of the Joachim Center to permit rejuvenation of the church building. The crying room was enlarged, a reconciliation room was added, the altar was moved forward, the organ was moved to the center front, new carpeting was laid and lighting was added. On October 14, l994, the church was rededicated by Bishop Joseph L. Imesch and the next day we returned to our regular worship program in our beautiful, lighter and brighter church home. This event coincided with the twenty-fifth anniversary of the first Mass in St. Anne present church. We now have 1791 families in our parish family, with over 1000 students from pre-school through high school enrolled in our education programs.

Father John McGeean was transferred from the parish in June 1997. At this time, Saint Anne became a “one-priest” parish with Father Dan being the only full time priest here. Father Robert Collogan was assigned as the part-time Parochial Vicar to Saint Anne Parish in August 1997. In February of 1999 one of our Deacons, Les Hancock passed away, leaving us with two deacons and one deacon in training. In June 2000, Father Collogan was assigned full time to Saint Anne Parish.

On January 24, 2000, our church building suffered a devastating fire. Due to the extent of the damage, the Parish Council and Administration Commission agreed it was best to demolish the church and begin anew. Groundbreaking for our new church building and offices was held on October 14, 2001. The parish rectory was demolished to make room for the additional parking required by the Village of Oswego. The demolition of the church and rectory began on November 19, 2001. Construction of the new facility began in early 2002. The blessing of the bells and the laying of the cornerstone was presided over by Bishop Roger L. Kaffer on April 6, 2003. The Dedication of the new church was a very important part of the 40 year history of Saint Anne Parish when Bishop Joseph L. Imesch dedicated the new church. Over 1,200 people joined with 30 priests from the Dicoese of Joliet for the Mass of Dedication on July 19, 2003. Throughout the new church, you will find many items salvaged from the destroyed church and refurbished. Among these items are the Crucifix and the statues of Saint Anne, Mary and Joseph.

The church seats 1,200 people with 21 places for wheel chairs located throughout the nave. The nave is 12,000 square feet of floor space. The height of peak is 68 feet. The facility is fully sprinkled and lightning protected. The lower level is currently 18,000 square feet of unfinished space. Plans for the lower level include classrooms for the continued growth of the Religious Education program. It took over 385 working days to construct the church, connecting link and new administrative offices at a cost of $8.3 million. As with all previous building programs, no capital fund drive was held. Parish Stewardship through the Sunday Offertory funded the costs of the new church.

The Oswego housing boom continued through 2005 when Saint Anne Parish reached the 2,800 family mark. This translated into over 8,900 Catholic members registered with the parish. At this point Saint Anne Parish ministries continued to grow and expand to over 50 organizations and ministries active in the parish. The Religious Education Programs, including pre-school through high school, had over 1,350 students. Father Bob Collogan left the parish at this time, leaving only one full-time priest. At this time, the priests of Marmion Abbey began assisting with weekend Liturgies. In addition, numerous retired priests as well as the priests of the Missionaries of the Sacred Heart assist with daily Mass, Reconciliation and various needs.

By September of 2008 the parish has grown to over 3,500 families and almost 12,000 Catholic members. The many parish ministries and organizations continue to thrive and provide for the needs of the parish. Adult Faith Formation programs continue to flourish. The Religious Education program serves over 1,600 students in Pre-K through High School. Over 300 catechists, aides and various volunteers give of their time and talent to bring their faith to the youth of Saint Anne Parish. The parish continues to reach out to the surrounding community through their support of the PADS Program (homeless shelter in Aurora) and by monthly food collections benefiting the Kendall County Food Pantry. Hundreds of volunteers participate in the various aspects of our parish liturgies. There continue to be many opportunities for prayer and worship held daily. In addition to the many dedication volunteers, the parish is served by five full time staff member and eight part time employees

We currently have over 2,200 registered families with approximately 700 children in our Religious Education Program.